My compositions and arrangements have been performed and recorded by Fretwork, the Bach Players, Queens’ College Choir and the David Gordon Trio. The compositions draw on diverse musical influences but are unified by common themes, most notably the coexistence of joy and grief. The arrangements reflect my fascination with musical riddles and the challenge of capturing the style of a specific composer.

Four-part choir, organ, with optional parts for strings and harp

Composed for the Battersea Choral Society  and first performed in December 2016.

My starting point for composing this carol was a mental image of the shepherds utterly terrified by the appearance of the angel – a recognisably human response – and an idea of how I could use harmony to portray the other-worldliness of the encounter, the alluring and unsettling sound of the angel’s voice and the fear it induced.

The second mental image I had was of the shepherds hurrying to Bethlehem, their fear turned to joy, and celebrating the message of the angel just as we do today, by breaking into song (in effect, the birth of the Christmas carol), their songs mixing with the song of the angels. I chose carols with texts that mirror the experience of the shepherds (‘let nothing you dismay’ and ‘O tidings of comfort and joy’ from God rest you merry, gentlemen and ‘O come ye to Bethlehem’ from O come all ye faithful) interspersing and combining these with the apparently ceaseless song of the angels (‘Glory to God in the Highest’).

The text from Luke’s gospel is familiar from Handel’s Messiah, and the spirit (and at times the letter) of the Messiah setting of the words governs the central section of the carol. 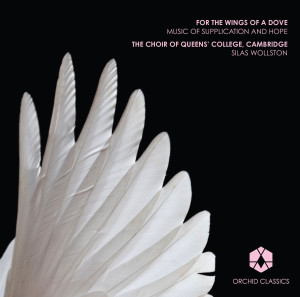 Hide not thy face, 2015
Eight-part unaccompanied choir
Recording: For the Wings of a Dove, Queens’ College Choir
This motet is a companion piece to Purcell’s famous ‘Hear my prayer’ that continues with the text of Psalm 102 where Purcell left off. 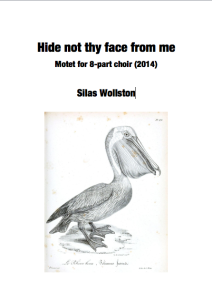 Dating from around 1685, Purcell’s piece appears to be the opening section of a larger work that he did not complete: in the autograph manuscript, the elaborate flourish that usually marks the end of a piece is missing, and it is followed by a number of blank pages. In my own piece, I adopt Purcell’s idiom at first before the music breaks out stylistically as the entreaties of the supplicant become evermore desperate. In the central section of the work, the psalmist expresses a profound sense of isolation, symbolised by the pelican, the owl and the sparrow (most likely a blue thrush), solitary birds that still inhabit the deserts of the Middle East.

The idea of writing a companion piece to a work by Purcell has a historical precedent in the works of Samuel Sebastian Wesley. At the end of the score of ‘Man that is born of a woman’, composed in the mid-1840s, Wesley states that his piece is intended to precede Purcell’s ‘Thou knowest Lord, the secrets of our hearts’, an anthem of simple dignity that was composed in 1695 for the funeral of Queen Mary. While Wesley adopts many of the rhythmic and harmonic features of Purcell’s style, his own distinctive musical language is unmistakable, as at the phrase ‘never continueth in one stay’. Wesley was himself following the precedent of William Croft, who incorporated the same Purcell setting into his version of the burial service published in 1724. The pairing of Wesley and Purcell’s music found on the Queens’ College recording was performed in St George’s Chapel, Windsor, at the elaborate memorial service for Queen Victoria in 1902. 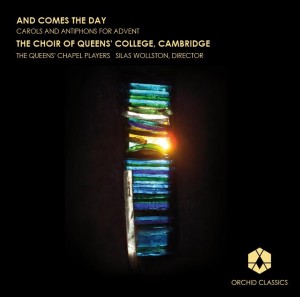 I saw a sweet and seemly sight, 2012
Unaccompanied choir
Recorded: And comes the day, Queens’ College Choir
A setting of an English medieval ‘lullaby’ carol in which the Virgin Mary is portrayed as mourning the death of her son even at the moment of his birth. Read my article as a pdf: A new carol for Queens’ College

Living Traces, 2006
Piano solo overlaid with excerpts from a recording of Bach’s cantata BWV190 and a recording of the Lord’s Prayer in Swedish
Written in memory of Katherine McGillivray, this piece incorporates excerpts from a recording of ‘Jesus soll mein alles sein’ from Bach’s cantata BWV190 in which Katherine plays the viola d’amore. [Read more] The use of the Lord’s Prayer in Swedish refers to Katherine’s last months spent in Sweden learning to play the nyckelharpa, the Swedish national instrument. A fund to support musicians to take a career break and develop new skills was set up in her memory – find out more or make a donation.

Birthday Sonata, 2003–5
Oboe d’amore, viola, cello, chamber organ
This three-movement sonata treats the ‘Happy Birthday’ theme canonically and fugally in the style of Bach. Its models are a cantata aria, two organ chorale preludes, a fugal gigue and the last movement of Brandenburg Concerto no 5. It was composed for my mother’s 60th birthday. 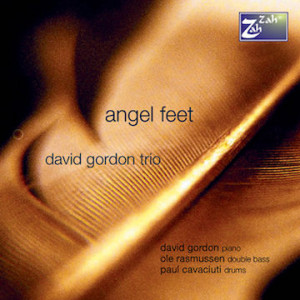 I was introduced to the music of D’Anglebert and Louis Couperin in 1996 by Jill Severs, my harpsichord teacher at the Guildhall School of Music and Drama. I adopted elements of the rhetorical language, ornamentation, texture and structure of my models; my harmonic language grows directly out of dissonances in the D’Anglebert Tombeau and the notation in the last bar is a reference to the ending of Dowland’s ‘Semper Dowland semper dolens’.